I happen to really love history, especially military history. When on vacation, I drag my less-than-enthusiastic friends to obscure Civil War battle sites and get WAY too thrilled by accidentally stumbling across a house that was once used as a Civil War hospital.

Recently, I got my hands on a series of lectures about great military disasters. I’m talking about battles that went so horribly wrong that entire armies were wiped out and empires fell because of it. The losing side in some of the battles in the lectures had something like 80-100% casualties.

Interestingly enough, the SAME problems kept popping up in almost every battle that went horribly wrong. And, as a writer, I started paying attention. If I wanted to write a battle scene where the villain lost a battle in a horrific, defining way (or the hero, though this is more rare because battles that are lost this spectacularly are hard to recover from) , history gives LOTS of examples on exactly how that should be done.

Here it goes. A set of instructions on how to Horribly, Epically Lose a Battle. 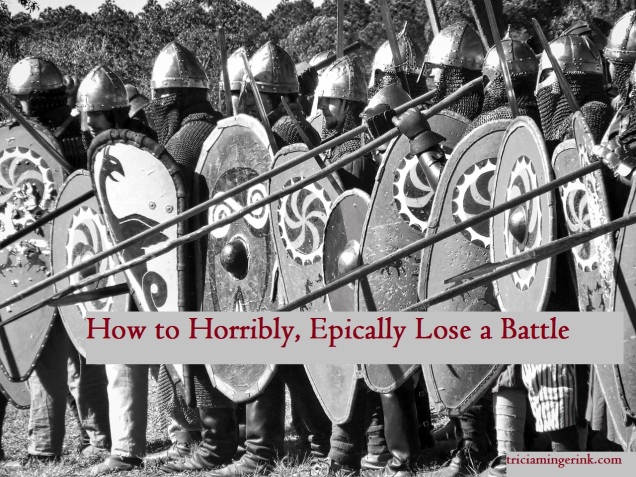 If you want to lose a battle as disastrously as possible, this is the number one thing to keep in mind. Almost every horrible, tragic defeat stems from this.

Overconfidence leads to a host of other errors such as underestimating the enemy’s intelligence and numbers (preferably coupled with a healthy dose of prejudice that the other side can NEVER be as awesome as your own men), ignoring basic military tenants (such as scouting the land and the enemy’s position before engaging in battle), not knowing when to retreat, pouring more resources into an already lost battle and thereby making the loss even worse than it would’ve been, and even ignoring your own orders (such as ignoring your own order to fortify your position when encamped in enemy territory and instead letting your camp sprawl out in all disorganized directions).

This number one error will ultimately cause a compounding of several errors and lead to an epically horrible defeat that will probably end your life or at the very least bring down whatever empire you were hoping to build.

2. Put People in Leadership Positions who Hate Each Other.

If your commanders, especially your top commanders, cannot work together, you will be well on your way to a massive military disaster, especially if you’ve stuck to advice #1 and cling to overconfidence.

If your commanders hate each other, they won’t communicate on the battlefield, leading to mismanaged charges, missed opportunities, and strife within the ranks. They might even get so caught up in verbally fighting each other that they forget about actually fighting the enemy, or they will actually hinder each others ability to fight the enemy.

Better yet, make sure one or both of these commanders are incompetent as well as argumentative. Epic military disaster will ensue.

3. Make as Many Tactical Errors as Possible

Usually, these tactical errors will automatically arise from overconfidence, and that overconfidence will also prevent you from correcting them when they do occur.

If you follow these three instructions and compound all of these errors one on top of another, you will lead you, your men, and your empire into a disastrous military defeat that will probably lead to your death.

All joking aside, while this list seems like a rather hyperbolic list, in the lectures I listened to on military disasters, this is exactly what happened through 23 major military disasters across thousands of years of history all over the world. Some of the mistakes that were made were so foolish, a writer would hardly dare have a villain make that mistake because they would appear too foolish to live (and that is usually exactly what happened in history). Some of the battles were hard to listen to knowing that much of the bloodshed was unnecessary. So why am I writing a post on history when this is a writing-centered blog?

I happen to love history. History is, after all, God’s Story. It is the biggest, most elaborate, craziest Story that has ever been written.

Take, for example, the founding of the U.S. Navy. Did you know our Navy was founded because of…pirates?

In the Revolutionary War, George Washington wanted the Continentals to found a navy to combat Britain’s navy. With the exception of John Paul Jones and a few others, this initial navy was a dismal failure.

After a few years once the U.S. Constitution was written and George Washington became the first president, the United States’ survival was still uncertain. Without the protection of the British navy, the ships and shorelines of the new country were vulnerable.

The Barbary Corsairs were a group of pirates that operated out of the North African states of Tripoli, Algiers, and Morocco. They preyed on European shipping, raiding their ships and taking their crews captive to sell as slaves in Africa. The big powers, like France and Great Britain, paid massive amounts of money to these Barbary states to buy supposedly safe passage for their ships. When the United States had been a colony of Great Britain, their shipping had been protected by this tribute. As a separate country, the ships of the United States were now fair game for the corsairs.

So in 1794 President George Washington brought up the idea of starting a navy for the second time. Chaos ensued.

Finally, someone in Congress got the idea of a compromise. Congress approved the building of six ships as long as a treaty with the Barbary corsairs was also pursued. If a treaty was signed, then the work on the ships would stop. Late in 1794, a treaty with the corsairs was worked out where the United States would pay the corsairs a lot of money as tribute. The amount of tribute was so high it could have built sixty ships.

This treaty kind of worked for a while. The United States struggled to pay the tribute and even gave the corsairs a brand new ship as part of the payment (yes, let’s give the pirates a nice ship so they can attack us more). Work on the six ships the Congress had approved did eventually restart and they were finished in 1797 . The corsairs continued to raid U.S. merchant ships because they knew the U.S. couldn’t do anything about it.

By 1801 Mr. Anti-Navy himself, Thomas Jefferson, was President. Public outcry over the corsairs grew so bad that he declared the U.S. would no longer pay tribute. Tripoli promptly declared war, making them the first foreign power to declare war on the United States. Thomas Jefferson sent the U.S. Navy into its first, official war. While the Barbary War didn’t end the tribute, it did reduce it and give the sailors in the Navy valuable experience.

After the War of 1812 ended in 1814, James Madison decided to end the tribute to the Barbary corsairs once and for all. This time, the Navy had the confidence of surviving a war against Great Britain, the foremost naval power of the world at the time. It could handle a few pirates. By the time the U.S. Navy finished the second (brief) Barbary War, the Barbary States were paying the United States for damages. A few years later, Great Britain and France realized that if the upstart Navy of the United States could handle the Barbary corsairs, then their navies could too. They both attacked the Barbary States, ended their tribute, and basically ended the reign of the Barbary pirates for good.

From then on, the U.S. Navy has been a permanent part of the Federal Government. All because of a bunch of pirates. Crazy, huh?

What do you think? Would you have written a fictional world where a navy was founded because of pirates?