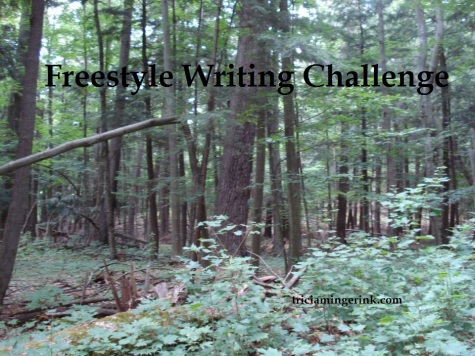 A little while ago, Lauren tagged me in the Freestyle Writing Challenge.

Here are the rules:

In the interest of full disclosure, I’ll admit that I broke #5. It’s such a part of my natural writing process to backspace when I want to change a word, phrase, or I type something wrong that I didn’t realize I was doing it until partway through the challenge. I still made a few typos that I didn’t go back and correct, so I mostly following the rules.

My topic was: Your two main characters from two different WIPs happen to meet. What are the circumstances? What happens? Which setting do they land in?

This presented a little bit of a problem. Currently, all of my WIP are in the same series. All the main characters already know each other.

Finally, I decided to use a main character from a manuscript I wrote with a friend of mine, who also happens to be one of my alpha readers. We started this manuscript back in 8th grade and completely deleted it and started over 3 times over the years.  Someday we hope to publish it but right now it continues to be an ongoing WIP.

One of the main characters, the Shadow, happens to be an outlaw who is tall, dark-haired and dark-eyed, amazing with knives, good with a sword, and decent with a bow and arrow (hey, I started writing this in 8th grade when clichés were cool).

When I started writing Dare, my friend and I joked around comparing Leith and the Shadow from the manuscript we’d written together. At first, I worried they were too similar, but all the re-writing I did on Dare made Leith into his own character. One of the things we talked about was who would win in a fight. The following couple of paragraphs is what we eventually decided:

Leith blinked at the deep forest around him. What was he doing here? The trees, taller and broader than any in Acktar even in the depths of the Sheered Rock Hills, loomed far over his head. The leaves layered the forest floor beneath the sprouting saplings and ferns.

The forest was still. Quiet. Leith froze. If only Blizzard was here with him to alert him to trouble. But Blizzard seemed to have disappeared along with everything else familiar.

A movement caught his eye. Just a flicker. A shadow.

Something was there. Or someone. The hair on the back of his neck prickled. He drew his knives and crouched.

A man stepped from behind a tree, a knife in one hand, a sword in the other. Leith glimpsed a hint of movement and dove to the ground an instant before a knife thunked into the tree behind where he’d been standing.

Why did it have to be knife throwing? He rolled and lunged at his attacker. The other man stepped back and swung his sword at Leith.

Leith twisted to avoid the thrust, but the other man seemed to sense how he’d move. The sword grazed his side. Leith ignore it as he thrust one knife towards the man’s chest, his other knife coming up low and fast at the man’s stomach in a move that always caught a swordsman off-guard.

All swordsmen except this one. Leith’s attacker dropped his sword and grabbed Leith’s arm, deflecting the knife away from his chest. His other hand swept Leith’s strike at his stomach aside.

Moments later, a knife appeared in the man’s hand. He loomed a good foot taller than Leith. Leith barely had time to parry. The blow knocked his knife from his hand.

He reached for the second knife strapped across his chest. His hand met nothing by air and empty leather. Gone. How could his knife be gone? He’d only drawn two.

He reached for one of the knives in his boots but froze at the prick of steel under his chin.

Leith’s gaze traveled down the length of the knife pressed against his chin. Down the gleaming blade and to the hilt gripped in the stranger’s fist. A hilt emblazoned with the initials LT.

The stranger raised one eyebrow. “I grew up on the streets. I learned a thing or two about picking pockets.”

Yep, we eventually decided the outlaw the Shadow from our manuscript would defeat Leith. Mostly because the Shadow is more competitive, and I gave Leith a few more limitations.

I’m going to leave this as an open tag. If you’d like to do the Freestyle Writing Challenge, here’s your topic: You and one of your main characters are locked in a dungeon. How do you try to escape?