Anyone who follows my Facebook page probably noticed my excited pictures when Angie Brashear’s newest release Of the Coldblooded arrived on my doorstep. Thanks to blog tours and overall busyness, I hadn’t had a chance to post this as part of a Fun Fiction Friday until now. 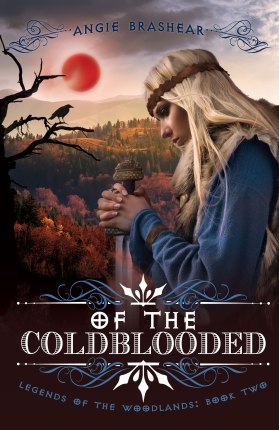 Laila Pennedy is a warrior, no longer insecure and weak.

She’s confident the Faithful will overpower the Rendow Clan. Besides, Lars Landre, the Chosen of the Woodlands Region and her betrothed, cannot be defeated. She believes this with all her heart…until tragedy collides with conviction.

In the wake of disaster, the Kinhood threatens to capture Laila, yet offers mercy until autumn’s third full moon if she abides by their commands. But she’s set on revenge. And this time, she won’t be deterred.

This time…she’s the hunter, not the hunted.

Unexpected loss. Compelling wrath. Bygone faith. How in all the Woodlands will Laila survive?

Isn’t this cover gorgeous? And for those of you who were wondering, it looks really nice on my shelf next to the first book in the series Of the Persecuted. 😉

This book has a shift in tone from book 1. In Of the Persecuted, Laila is scared and insecure. But she also sees some of the wonder of her world, and there’s a lot of wonder to see.

In Of the Coldblooded, Laila is confident. Too confident. In both herself and in Lars. Her confidence in people is so much that when the first major plot twist happens, her faith is challenged.

While the first book concentrated on finding confidence in faith, this book shows how that confidence and faith needs to be rooted in the Maker, not in people or self. I really like how that theme was woven through not just Laila’s character arc, but several character arcs during the book.

Once again, this fantasy world is vast with creatures both familiar from the first book and a few new dangers. The plot twists and turns. I guessed a few of the plot twists (mostly because my optimistic self wanted it to be that way), but a few still surprised me (both happy ones and shocking ones).

My only small concern with this book is it almost felt like it had too much action (I know, strange coming from me). Sometimes, the action sequences happened so quickly, I had to go back and reread to page to figure out what was going on. This book didn’t have as many moments of quiet reflection between action the way book one did. There is more violence in this book than the first book, and one execution scene that churned my stomach (and that doesn’t happen often). Still, I didn’t think the additional violence or dark tone was gratuitous. They were necessary for the character and plot development. Laila is struggling with a darker side of herself, and that tone comes out through the book. She has become coldblooded, and that doesn’t leave a lot of room for quiet reflection.

I continue to recommend this series and this author to those who are looking for good Christian fantasy. Now I’m eagerly awaiting book 3 and whatever twists and turns it has in store!

2 thoughts on “Fun Fiction Friday – Of the Coldblooded”