I actually finished Morgan Busse’s Follower of the Word series a while ago but haven’t had the chance to spotlight it here on my blog yet.

Many of you in the Christian fantasy community have probably already read this series, since it released over a period of a number of years. I was actually kind of glad I didn’t stumble onto this series until late last year because I only had a few agonizing months to wait for the third book. For those of you who haven’t read it yet, you’re privileged that you can read the entire series without a wait! (Because trust me, you won’t want to wait!)

If you’d been following my blog for a while, you’ll know I’m a big fan of Christian fantasy, and this series is Christian fantasy at its finest. The characters are all well-developed and the multiple POVs do not get confusing. I loved all the characters so much that I had a hard time picking a favorite. Once of the main characters is a reforming assassin, and all of you know how I like stories with assassins in them! 😉

There are two things that especially impressed me about this series:

1. Even the established Followers of the Word have struggles. Too many Christian books make it seem like things instantly get easy once a person follows Christ. That isn’t the case in real life, and it certainly isn’t the case in the Follower of the Word series. In fact from an earthly standpoint, things get a lot worse for the characters. Each character pretty much is called on to give up everything they hold dear to follow the Word. Things appear really dark. Faith is tested to the breaking point. Characters are forced to make choices they never thought they’d have the strength to make. Yet, the Word is still there for them, giving them the strength they need.

2. It has one of the best representations of Christ I’ve read. Representing Christ in fiction is extremely difficult. How does an author capture a glimpse of God on the page? C.S. Lewis’s representation of Christ in Aslan is probably the best I’ve ever read because somehow Aslan captures friendship and awe-inspiring power. The Word in the Follower of the Word series is a close second. The Word is a friend yet remains powerful and mysterious. The representation of how He bears our guilt really made me think about what Christ did to pay for my sins.

I highly recommend this series! 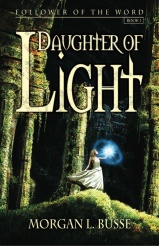 As the Shadonae rise in the west and war threatens the north, a young woman discovers she is not human . . .

Rowen Mar finds a strange mark on her hand, and she is banished from her village as a witch. She covers the mark with a leather glove and seeks sanctuary in the White City. She lives in fear that if she touches another person, the power inside her will trigger again, a terrifying power that allows her to see the darkness inside the human heart . . .

But the mark is a summons, and those called cannot hide forever. For the salvation of her people lies within her hand. 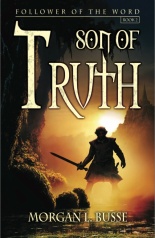 The war in the north is over, but the war for all the Lands has just begun. As the Shadonae solidify their hold on the city of Thyra, Rowen Mar, the last Eldaran and savior of the White City, awakens to find herself hunted by those she has saved.

Meanwhile, the assassin Caleb Tala finds himself in the presence of the Word. The time of reckoning has come, and he must pay the price for all the lives he has taken. But in his moment of judgment, Caleb is given a second chance to change his life.

These two hold the power to save the Lands from the Shadonae. One must escape slavery, and one must choose to forsake everything before the world is consumed in darkness.

The great city of Thyra has fallen and shadows spread across the land. Rowen Mar, the last Truthsayer, is taken before the Shadonae. But the Shadonae are not who she thought they were, and now they want to claim her as their own.

Caleb Tala, former assassin and prince, is now a Guardian of mankind. Exiled from his country, Caleb wanders the desert in search of his mother’s past and clues to who he is.

These are the last days of the Eldaran race. Rowen and Caleb must find their way along the dark path set before them by their ancestors: to heal what was wounded and love where hatred grows. But the road is narrow and the darkness beckons. If either of them fails, all will be lost…

And the human race will be no more.

Have you read the Follower of the Word series yet?

9 thoughts on “Fun Fiction Friday – Follower of the Word series”